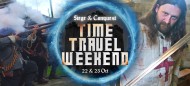 Step back in time and meet characters from different periods of history at this special event marking the 950th anniversary of the Battle of Hastings, and also the Siege of Newcastle that took place during the English Civil War.

Norman soldiers (from the Black Gate Combat Academy) will patrol the lower depths of the Castle, just as they did after the first ‘New Castle upon the Tyne’ was founded in 1080 by William the Conqueror’s son.

The Great Hall will come under the occupation of Scottish Parliamentarian forces, harking back to the town’s surrender to the Scots in October 1644. Watch as members of the Erskine’s Regiment fire their muskets, and learn how warfare developed in the centuries following the Norman conquest.

Attending on the Saturday are Wild Dog Outdoors who will be demonstrating authentic weapons, and explaining how ailments and injuries used to be dealt with.

On Sunday, David Silk of The Moss Troopers will thrill and entertain with stories of medieval chivalry and swordsmanship.

The weekend will also mark the on-site premiere of three short films made by Beacon Hill Arts, funded through the Heritage Lottery Fund with support from the Joyce Trust and the Hadrian Trust. The award-winning team of young artists – who have a mixture of learning disabilities, autism and additional needs – have focused on three fascinating characters from the Castle’s history: Sir William Heron - a notoriously wicked sheriff; Mary Bruce - the captured sister of Robert the Bruce; and teenage outlaw Humphrey Lisle.

These films run approximately 15 minutes in total and will be shown in the Black Gate (the Castle’s 13th century gatehouse) every hour on the hour between 11am and 4pm, before being incorporated into a new interactive exhibition.