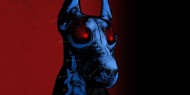 The Hound of the Baskervilles: Northern Stage

Charles Baskerville is dead, and a terrifying beast is rumoured to stalk the moors around the remote Baskerville mansion.

When Sherlock Holmes sends Doctor Watson to investigate, Watson finds himself surrounded by dense fog and a community steeped in folklore, legend and rumour. At Baskerville Hall, the line between reality and myth is no longer clear.