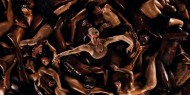 Inspired by true stories of oppression, Black Waters draws on two historical narratives: that of the Zong massacre, where 130 slaves were thrown overboard and drowned in order to claim insurance on their lives, and a story of Indian freedom fighters who were jailed in the island Prison Kala Pani by British colonial forces.

The piece will explore the processes which caused the birth of an Indo-Caribbean diaspora for whom “home” always remained a contested space.