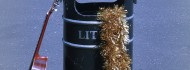 Present is a high octane, energetic, festive show with live music that tells the story from an invisible community.

t’s the 23rd December and Dave is preparing his Christmas tradition – to get blind drunk and dance the night away to the sound track in his head. The music helps him - it frees him, drowns out the voices and keeps him alone – well, avoided.

​He’s a dancing drunk to a soundless soundtrack, until the buzz from his phone stops the noise – bringing him back to the real world.

​It’s a text that gives him the chance to create a new Christmas tradition and meet his grandson for the first time. Written and Directed by Ali Pritchard.

Pay What You Feel

Venue Details
Alphabetti Theatre has opened up their doors to a new venue on St. James' Boulevard. With shows most evenings, the theatre is a cultural hub for North East artists and theatre-goers to enjoy using for work and play.   Based in Newcastle upon Tyne a...