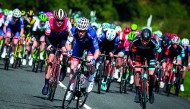 Elite cyclists are getting in gear for the OVO Energy Tour of Britain! Following on from our incredible Newcastle City Sprint back in July, we're back on two wheels for the OVO Energy Tour of Britain.

With a dash along the Quayside and a spectacular finish on Grey Street, watch on as the UK’s biggest professional cycle race returns to Toon this September! Sports fans of Newcastle, the North East and beyond are invited to be a part of the OVO Energy Tour of Britain as NE1’s summer of sport continues this September!

Taking place on Monday 9th September, elite cyclists will begin the gruelling 182km Stage Three in Berwick-upon-Tweed, before arriving for some city centre thrills in NE1! Expect high-octane action as the athletes lap up the route along the banks of the River Tyne, before they take a final turn onto Dean Street and Grey Street for a spectacular city centre finish!

This is the first time in over 10 years that the OVO Energy Tour of Britain has been staged in the city and will attract some of the finest cyclists in the business. We’re expecting large crowds in NE1 as this thrilling race whizzes through the Toon. Gather the gang, find a spot along the route and cheer on the competitors as we enjoy another spectacular sporting event in Newcastle. Don't miss it this September.