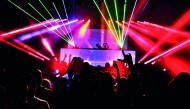 Night out on the Toon!

There's a good reason why Newcastle's nightlife is renowned around the world!

October is an amazing time in Newcastle as the city welcomes a whole host of world famous DJs to the city. From bass-heavy party blowouts, flamboyant gatherings and luxurious VIP experiences, it’s no wonder NE1 ranks top for party- lovers. Check out our guide to the hottest DJ appearances and exclusive gigs kicking off in the Toon this fortnight! Dance all night long as Horse Meat Disco rolls into Toon. Arriving at WHQ for a massive all-night soirée, Horse Meat Disco have evolved into a global entity since beginning in 2003. Taking inspiration from a diverse, counter-culture history of clubs and DJs, Horse Meat Disco have become a massive player in the dance scene and now have residencies in cities across the world and regularly feature at some of the biggest dance festivals around. Back in NE1, fresh from headline sets around the globe, make sure you catch them this October as they take over WHQ! Hot off the heels of last year’s critically-acclaimed album, 'Kingdoms in Colour', groove away as Maribou State kick off a packed autumn schedule of events at Digital! Having just headlined Green Man Festival and featured on the Lotus stage

at the acclaimed Primavera Sound festival in Barcelona, Maribou State have been turning techno heads and taking crowds by storm with their trademark electronic sound. Having received huge support from Annie Mac, Nick Grimshaw and featured heavily on BBC 6 Music throughout the years, make sure you catch the kings of chill out techno! Boogie on down to WHQ for an evening with Congo Natty! Celebrating 30 years as a renowned MC, join Congo and his crew as they deliver a Jungle masterclass that will have you moving all night long. Tickets start from £8 and are selling quickly! A massive figure in the UK dance scene, dance the night away at Cosmic Ballroom as Dave Pearce
rolls into Toon. Having sold over 1 million compilation albums in the UK and featured highly in the UK Chart positions on a number of occasions, Dave Pearce has become a prominent figure of the dance scene after featuring in DJ Mag’s Top 100 DJs in the world three times! Having launched the incredibly popular Dance Anthems on BBC Radio 1, Dave Pearce showcases his brand-new Trance Anthems album at Cosmic Ballroom this October. Don’t miss out on experiencing this iconic dance figure! Settle in for an evening of world-class music as Project Pablo heads for WHQ. Flying all the way from Canada for an exclusive night in the Toon, Project Pablo (Patrick Holland) has become a household name in the world of garage, having released a wide variety of acclaimed records since his debut in 2014. Having played at some of the most exclusive venues around the world, it’s fair to say that WHQ are in for a treat come October 10th. With immersive decorations and interactive sea creatures transporting you to the lost city of Atlantis throughout the night, we can’t wait to plunge below the water! Join superstar DJ Amelie Lens as she arrives into Newcastle with her signature blend of enchanting techno tunes! Taking to the stage at Digital to celebrate LOOP’s 7th Birthday, Lens has built up a reputation as one of the most exciting DJs in the world and has taken the techno scene by storm since releasing her debut EP 'Let It Go'. Having recently performed exclusive sets at Circoloco Ibiza and Creamfields earlier this year, Amelie Lens has cemented her position as one of Europe’s most sought-after techno DJs. Limited tickets are still available, book yours before it’s too late! Lose yourself with an intergalactic evening of ambient tunes at Boiler Shop! Combining atmospheric techno tunes, visual art and science into an incredible immersive sound experience, Max Cooper takes to the stage with his critically-acclaimed third studio album 'One Hundred Billion Sparks'. Recorded during a period of complete isolation in his Welsh studio, Cooper promises an evening of relaxing serenity as he floats into NE1 this October. Tickets on sale now! Having recently released his debut album, 'Aletheia', in early September, join DJ maestro O’Flynn as he heads to Cosmic Ballroom! Since his debut in 2015, O’Flynn has quickly established himself as one of dance music’s most exciting talents with his unique blend of funky beats and luscious jazz elements. Having gained support from the likes of Four Tet, Gilles Peterson, Bonobo, Denis Sulta, James Blake and Hessle Audio, gather the gang and enjoy a fantastic night with a massive figure in dance music.

Are you hitting the Toon? We'd love to see you Instagram pics, your tweets and your Facebook posts when you're out and about in the NE1 with friends.