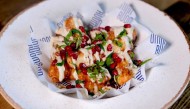 One of the city's most historical hangouts has had a facelift! Union Rooms is now a foodie's paradise with fancy interiors. A grand game-changer to say the least...

If walls could talk, the Union Rooms is one of the first places we’d sit down for a tipple and a tittle-tattle.Designed in 1877, the grand old building has many a tale to tell, first operating as a gentlemen’s club, then standing empty for 20 years before being resorted as a JD Weatherspoon in 1999.

Now, after a picture-perfect regeneration programme, which kicked off in August 2018, it’s back and it’s more beautiful than ever. Cyclone Leisure Group, the brains behind other foodie favourites in the region, such as the San Lorenzo restaurants in Gosforth and Washington, have brought the business back to life. Now, it's a fresh and flamboyant new foodie hotspot, serving everything from brekkie and brunch, to Sunday lunch, late night pizza and cocktails! Sitting proudly in its place on Westgate Road, the Union Rooms retains much of its French Renaissance-style architecture, helping to create a bold new space, combining funky furniture with impressive roofscape features and quirky modern touches.

It’s sleek and it’s stylish, but it’s as grand as it was all of those years ago. An iconic building with a new lease of life. We’re in for a between-meetings ‘Power Lunch’ – perfect for on-the-go city workers. From Monday to Friday between 12pm and 5pm, foodies can enjoy piccolo pizza, baps, wraps, salads and burgers, all for just £6.50! Round up your work pals and check in for your very own lunch-break pizza party - packing two tasty toppings on a 9-inch, hand-pulled, stone-baked pizza. If pizza’s not your thing, you can ‘wrap or bap’ with fajita chicken, brekkie club, salt beef and more!

It’s the ‘Pig Pimpin’ wrap for us. A wholesome, hand-stretched flat bread oozing with BBQ pulled pork - topped with a cheesey sauce. Served with skin on fries and salad, it’s the perfect express lunch. We’ve already got plans to return for a roast in the glorious Garden Room, with oodles of gravy, veggies and Yorkie puds! The colourful cocktail list is also worth checking up on - as is the make-your-own pizza kids menu and bustling breakfast club.