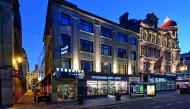 Follow our guide to another great weekend in NE1!

Sausage and Cider Festival 2019 arrives in NE1 this August for the first time! Get ready to sample a great array of amazing craft ciders and the finest sausage bangers at Newcastle Civic Centre! With a huge variety of delicious treats from the finest butchers around, this will have you licking your lips in no time! Book character costumes aren't just for World Book Day! Dust the cobwebs off and head down to Seven Stories for Dress-Up Weekends! With discounts available for adults dressed to impress too, make sure to get involved at the Character Themed Crafts workshop and catch the Characters on Parade tour!

Make a date with that special someone and head over to House of Tides for an evening of fine dining! Featuring a contemporary menu, tuck into salt-aged venison or try the native lobster! Delicious! Part of Tyneside Cinema’s season of exclusive broadcasts from the National Theatre, settle in for a live streaming of The Lehman Trilogy. Critically-acclaimed and nominated five times for the Olivier Award, this story follows the path of the Lehman family that would change the financial world forever. Make sure you don't miss out!

Rock on down to The Cluny for an evening of unadulterated punk rock! Having released three studio albums and toured with the likes of Green Day around the globe, China Drum arrive in NE1 with an exclusive show! Don’t miss this rare opportunity as they re-visit their 1996 Reading Festival set! Swing by the picturesque City Tavern for a spot of breakfast. Having recently undergone a summer facelift, why not sample a hearty English breakfast or perhaps 'eggsplore’ their delicious Eggs Hemingway!

Kick back and relax with a Sunday screening of Mary Poppins Returns at NE1’s Screen On The Green! Join Emily Blunt as she returns for an adventure bursting with magic and mischief! Knife and forks at the ready! Hunker down at Tomahawk Steakhouse for a unique twist on the traditional Sunday roast! Devour a 28-day Himalayan salt- aged sirloin, with all the trimmings! Delicious! Hailed as one of the most exciting and greatest live acts across the globe, Skunk Anansie roll into NE1 this September! Stopping off at the O2 Academy following the release of their 25th anniversary live album, the British rockers are set to take the UK by storm this summer!

Keep an eye out for our Get Into Newcastle magazine online and out and about in town, where you'll find a fun-filled weekend trail every week! Don't forget to let us know what you get up to on Twitter, Instagram and Facebook!