A fantastic weekend of Betfred Super League action awaits fans at St James’ Park. Newcastle United will be hosting Magic Weekend this July, being the first ever Magic Weekend to be played in the middle of Summer.

Venue Details
The sixth largest football stadium in the United Kingdom. Located in the centre of Newcastle, its white cantilever roof, the largest in Europe, is visible across the city. Besides Premier League football, St. James' Park has also been used for... 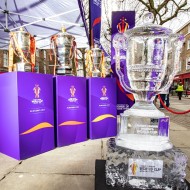