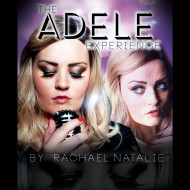 See Rachael Natalie as The Adele Experience at Newcastle's Grosvenor Casino this May!

The talented vocalist celebrates the music of one of the biggest and best selling international female artists of our time, Adele. Taking you on a musical journey from the start of Adele's career, with album '19' through to her most recent album, '25'.

Rachael is a unique and powerful sound a-like and look a-like tribute act who was recently performing in Los Angeles and won an award at The Reel Awards 2019 celebrity convention for her amazing tribute. As well as this, Rachael was nominated for Best Female Vocalist in Tenerife 2018 as well as also being nominated in 2017. She currently performs her tribute to Adele in and around the UK and also in Tenerife where the crowds love her talent and professionalism.

This must-attend dinner and show event includes a three-course meal, a drink from the bar, free bet, table tuition and live show.

Venue Details
Grosvenor Casino Newcastle is more than just a Casino, it's the perfect day and night leisure destination with a fantastic restaurant, amazing bar, sports & entertainment lounge, Poker room, Conference room and much, much more.    ...