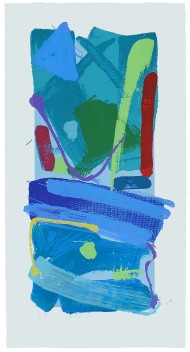 Craigie Aitchison and Anthony Frost are united by their love of intense, pure colour. Both prolific printmakers, screenprinting suits their use of recurring motifs, which play an important role in the work of both artists. Frost’s use of bold shapes, broad strokes and quick dots reflect his love of music, while Aitchison’s sparse but considered compositions of crucifixions or Bedlington terriers build to create a spiritual, poetic atmosphere.

Like Henri Matisse before him Craigie Aitchison abandoned a career in law to pursue his obsession with painting, enrolling in the Slade School of Art in 1952. His early talent was evident, quickly securing a British Council scholarship allowing him to travel in Italy. The clear light and natural, biblical landscapes had a profound influence on his work, which became filled with midnight blues, emerald greens and shocking pinks, a trend which continued for the rest of his career.

In contrast to Aitchison’s measured, calm scenes, Anthony Frost's bright abstracts buzz with expressionistic mark-making, with chance and random elements embraced as part of the creative process. Believing music to be the ultimate artform, Frost’s immediately recognisable visual language has developed in response to the music playing in his studio.

All works will be available for sale.