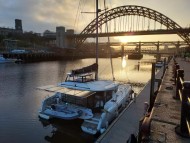 Launched back in 2015 and proudly situated on the city's bustling Quayside, Newcastle City Marina has provided water-loving travellers with a unique experience to moor in the heart of the NE1.

Located between the Tyne Bridge and Millennium Bridge, it provides one of the nation’s most iconic views, famous all over the world and symbolic of the city’s rich heritage.

Laura and Giles, better known as Catamaran Horizon recently headed over to Newcastle from The Netherlands. Hear from Laura about their recent visit and experiences of the Marina below. Have you ever been to Newcastle? We had not, but were always very enthusiastic about the city! After five days of visiting, we really appreciated this city.

The Millennium Bridge is spectacular, the warehouses along the quayside have turned into great apartments and all sorts of pubs and cool restaurants pop up looking amazing in old buildings.

After sailing up the river Tyne for 90 minutes, we came into the city centre of Newcastle and the Millennium Bridge which was nicely opened for us, and we sailed under it. In the small city, which is a pontoon of 130 meters long directly after the bridge, we lay in between bridges, close to all the monuments like the Newcastle Castle, the Black Gate and St Nicolas Cathedral. From our catamaran, we could see the Baltic Center for Contemporary Art, The Sage which is a spectacular glass building, dedicated to music and because of its shape called ‘the spotted dog’, and Saint Mary’s Heritage Center.

We really recommend a weekend trip to Newcastle, a ferry from Jmuiden will take you right there. To us, one of the highlights was a Glow in the Dark Kayak Tour. It was organised with eight kayaks and started at the pontoon where our ship was. All kayaks had led lights in different colours. They peddled under the Millennium Bridge which was also lit in many colours!

We would absolutely recommend Newcastle City Marina to our friends (we already did!), we think it's a real hidden treasure on the east coast of England!

To read more travelling tales from Catamaran Horizon, head over to their website - https://catamaranhorizon.com/