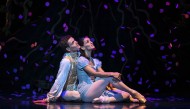 Wave goodbye to the January blues and step into February with tons of exciting do-this dates in NE1. Whetehr it's theatre, food or family time, we've got just the ticket for another busy week in the city... Theatre-lovers will be wowed by this bittersweet comedy drama about a 17-year-old boy who’s proud to be shy in today’s noisy, crazy world. A bittersweet comedy drama about a teenager who is fed up of being told to come out of his shell. Fun fact: the show's main character, Theo Ancient, starred as Albus Potter in Harry Potter and the Cursed Child. There’s a feast for wine-lovers happening down at Dobson and Parnell, and you’re all invited! Our friends at this Quayside gem will be joined by Scott McWilliam, a sixth generation family winemaker and ambassador for McWilliams winery. He’ll be guiding guests through a very special Australian Wine Dinner - celebrating the end of Dry January in style! The evening includes a welcome drink, five-course feast with five matching world-renowned wines and coffee to finish. Don’t miss it! Christopher Hampson’s Cinderella is everything we adore about the classic fairy tale – made fresh, funny and touching. Catch it at the Theatre Royal this week and allow the billowing ball gowns to whisk you away into a magical world! Complete with Prokofiev’s irresistibly melodic score performed live by the Scottish Ballet Orchestra. After six UK number one singles, five UK number one albums and 25 years together, 90s boyband Boyzone return to the stage in celebration of their new album, 'Thank You & Goodnight'. Catch them at the Utilita Arena this Wednesday as part of their 25th anniversary and farewell arena tour!

AN EVENING WITH ALICE ROBERTS: DIGGING INTO BRITAIN'S PAST Go behind-the-scenes at Northern Stage this Thursday as anthropologist, author and broadcaster, Professor Alice Roberts, delves deep into Britain’s past - sharing her personal journeys along the way! She’s presented seven series of Digging For Britain and has explored the history of our towns and cities in Britain’s Most Historic Towns, now she’s here in NE1 to share her own stories, anecdotes and footage. Don’t forget to join the live Q&A after the show!