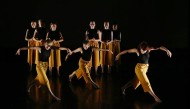 YAY FOR THE WEEKEND!

It's time for another super spring weekender in Newcastle!

Get your Saturday off to a relaxing start at Theatre Royal’s Inside View Coffee Morning. Chat with fellow theatre-goers over tea and coffee and listen to an exclusive talk from a special guest, who will be sharing their interesting stories and answering questions from the audience. Throw some flour around and make freshly-baked delights at Blackfriars’ Artisan Bread Making class. The restaurant’s master bakers will be sharing their tips and tricks on how to create the perfectly-risen, hand-kneaded loaf, using locally-milled, stone-ground flours.

Giggle, grin and celebrate Easter at Seven Stories. Its Story Catchers will be presenting a riot of joyousness with the very best in cheerful, joyful and upbeat books to raise your spirits! Ru Paul’s Drag Race favourite Jinkx Monsoon and lyrical genius Major Scales unite at Northern Stage for a new musical showcase, featuring music from their upcoming album and, of course, plenty of biting wit about the dark side of drag fame.

Throw on your black and white shirt and march on down to St James' Park for a Premier League clash between the Toon and Roy Hodgson's Crystal Palace. Can Rafa's side come away with another three points on home turf? Time to cheer on the boys in black and white! BBC Radio 1 Essential Mix DJ of the year 2018, HAAi, takes to the stage at World HQ for an all-night-long set. Lose yourselves in her hand-picked upbeat tunes, delivered in her unmistakable slow-release style.

Shop 'til you drop Round up the troops and mooch about Judy’s Affordable Vintage Fair at Boiler Shop. Expect vintage fashion, accessories and homeware from over 40 traders, plus delicious street-food.

Calling all budding-ballerinas! Check in at Dance City’s beginners ballet class for dancers aged 16+ this Sunday. Have fun with friends, pick up the basic steps and you’ll be ‘on point’ in no time. Sit back and relax in style at Tyneside Cinema’s Afternoon Tea at the Movies event. You'll be served Oscar-winning sandwiches, a selection of home-baked cakes, scones with clotted cream and tea or coffee with endless refills, alongside a classic film on the big screen. Take your seats at The Stand Comedy Club for comedians Matt Reed and Hal Branson’s laugh-a-minute panel show based on movies. Watch as two teams of hilarious comics battle it out to be the best at having nothing and everything to do with the silver screen. American rapper and YouTuber, MC Lars, also known as Andrew Robert Nielsen, arrives at O2 Academy as part of his tour in celebration of the 10th anniversary of the release of his album, This Gigantic Robot Kills.

Keep an eye out for our Get Into Newcastle magazine online and out and about in town, where you'll find a fun-filled weekend trail every week! Don't forget to let us know what you get up to on Twitter, Instagram and Facebook!