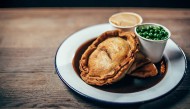 Five spots for foodies to find perfect pies in the city centre this British Pie Week...

Calling all pastry-loving fiends, Redhouse is throwing a week-long party for British Pie Week! They'll be running their regular £9.99 pie and pint deal on Monday, £12 for two pies meal deal on Wednesday and unveiling a whole host of special guest pies throughout the week. Don’t miss out on your chance to revel in Britain's favourite dish at Redhouse. Feeling extra gluttonous? Double up for an extra £3 - now we’re talking! In need of some pick-me-up comfort food this week? We've got just the treat... perfectly timed in celebration of British Pie Week! Tootle over to The French Oven in the Grainger Market and get acquainted with their famous slow cooked steak and Newcastle Brown Ale delight! Think tender chunks of steak, a hearty dose of Brown Ale gravy and mouthwatering mushrooms for just £2.20. Count us in!

Nestled underneath the Tyne Bridge at Akenside Hill, rally your pie-munching troops and waltz on over to The Bridge Tavern for a slice of their delectable chicken and leek pie! Served with heavenly creamed potato and seasonal greens, make sure you add The Bridge Tavern to your Pie Week agenda! The wonderful people at The Waiting Rooms have teamed up with Pieminister to create a selection of award-winning pies using the finest British ingredients. Whether it's the vegan special, a traditional steak and ale, or the mouthwatering moo and blue, there's something to put a smile on everyone's face. All pies, served with gravy, for £6.50. Winning!