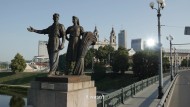 The eight sculptures served as a well-known landmark since their installation in 1952 and this film examines the necessity for their removal so long after the political ideology that they exemplified has been repealed. This process of erasure is documented by the artist using stereoscopic lenses, with the action of calibrating the cameras serves as a ritual for the object about to leave. The film presented in immersive ‘3D’ culminates in the final removal of the monuments at 2am on 20 July 2015.

Alongside this new work, Narkevičius will also present works on paper relating to the many hours of footage and a further installation, Books on Shelves and Without Letters 2013. Presented as a twin projection, it documents a young Lithuanian band playing a gig in a secondhand bookstore in Vilnius.

Venue Details
Housed in a landmark industrial building on the south bank of the River Tyne in Gateshead, BALTIC is the biggest gallery of its kind in the world presenting a dynamic, diverse and international programme of contemporary visual art. BALTIC has no perman...