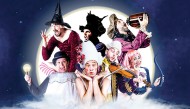 CINDERELLA & THE BEANSTALK - A FAMILY PANTOMIME Settle in for a side-splitting panto extravaganza at The Stand Comedy Club! After enjoying huge success last year with their first ever pantomime, Snow White 2, the kind folk over at The Stand have decided to give us Geordie folk an early Christmas present this year with Cinderella & The Beanstalk! Join Hannah Walker on her journey as she steps into the glass slippers of Cinderella and comes across the charming young Jack (Hal Branson). Will they ever fall in love? Can he manage to stop swapping cows for measly beans? Find out at The Stand’s festive panto extraordinaire! Coffee-lovers should head over to Carliol Square, where Flat Caps Coffee delivers the goods! It was voted ‘Best Coffee Shop in the North East’ at The English Independent Retail Awards in 2019, and it’s safe to say it's a must-try for any coffee connoisseur in the city! Make a date with Mrs Claus in her cosy Christmas kitchen this December! Wander on over to Seven Stories for delicious morning treats, festive themed games and
wonderful craft workshops! After tucking into toast, hot chocolate and a zesty fruit bowl, get involved in a whole host of intriguing craft activities, create sparkly decorations and write your final Christmas list - just in time for the big man’s appearance. A family favourite this winter! Rock ’n’ roll royalty are heading to the Toon! Don’t miss out on the chance to see legendary punk band, Buzzcocks as they roll into Wylam Brewery this December. Touted as one of the most influential bands to emerge in the new wave of punk rock in the 1970s, Buzzcocks became famous for their punchy guitar hooks and relatable lyrics about adolescence and teenage love. Expect top tunes, high-octane action and an evening bursting with all the Buzzcocks classics! Sing your heart out with friends to tracks such as What Do I Get?, Everybody’s Happy Nowadays and the iconic Ever Fallen in Love (With Someone You Shouldn’t’ve?). One for the adults! NE1’s legendary improv comedy troupe are back once again for another hilarious evening! This time, they’re bringing an epic Christmas misadventure to Northern Stage, and you simply cannot miss it! Bursting with mayhem and mischief, The Suggestibles take crowd suggestions to help inspire a night of crazy twists and turns, kooky characters and belting songs! Expect good guys, bad guys, furries, magical tales and everything in between. A great night out for the older folk of the family, expect the unexpected and settle in for a night of hilarious panto action! Tickets on sale now.