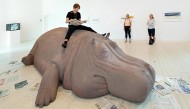 Settle in for a spine-tingling film screening of Rattle Snake at the Alphabetti Theatre. An epic tale based on real life stories of women who have faced and survived domestic abuse, Rattle Snake is a poignant experience that has previously been used to train frontline police officers responding to sexual and domestic violence cases. This incredible film was recently named the New York Times Critics’ Pick and became the winner of the Carol Tambor Best of Edinburgh Award too. Streamed globally to an audience of 27,000 in 35 countries as part of the UN Campaign to Eliminate Violence Against Women and Girls, book your tickets now and tune in to a superb movie at Alphabetti. Head over to Maldron Hotel with loved ones and tuck into a delicious festive lunch. Start your trip with a comforting winter root vegetable and chive broth, before filling your bellies with traditional roast turkey breast, juicy pigs in blankets, sage and onion stuffing, roast potatoes and homemade gravy. For just £15.95, the Maldron Hotel's three-course offering also brings sweet treats such as white chocolate and fresh raspberry cheesecake. The perfect end to a fine festive feast in NE1!

E.T. THE EXTRA- TERRESTRIAL IN CONCERT WITH RNS Film-loving families should head over to Sage Gateshead this December as Steven Spielberg’s iconic E.T. The Extra-Terrestrial comes to life with the Royal Northern Sinfonia! Telling the story of a lost alien who befriends a 10-year-old boy named Elliott, it's a family classic and it's back on the big screen on Tyneside! Don't miss the chance to experience this amazing film like never before as the RNS perform John Williams’ outstanding Academy Award®-winning score live alongside a HD screening! Grammy-award winning global superstar, Michael Bublé is heading to the Utilita Arena for an evening of feel-good sing-along - just in time for the festive season! Considered one of the world’s best entertainers, expect magical music moments, wholesome crowd interactions and much more. Renowned for his trademark velvety vocals, smooth moves, charisma and charm, this is an event you don’t want to miss this winter!

ANIMALESQUE / ART ACROSS SPECIES AND BEINGS There's a fab new exhibition underway at BALTIC this winter, and we wouldn't want you to miss it! Animalesque / Art Across Species and Beings brings together a fascinating selection of art forms including film, video, drawing, sculpture, installation and sound art, all of which challenge human impact on the planet. An inspiring display that really opens up discussions, encouraging people to rethink their relationship with the environment. Curated by London- based writer Filipa Ramos, this is an exhibition you certainly don’t want to miss. On show until 19th April 2020.