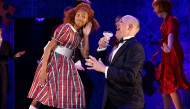 Based on the Oscar-winning film, which famously starred Tom Cruise and Dustin Hoffman, this new, attention-grabbing stage show comes to Northern Stage, promising a night to remember for all you film fans out there! Following two long-lost brothers, one of whom has a remarkable memory, on their quest to get their hands on their family’s multimillion dollar fortune, it’s a funny and heartfelt tale that’s guaranteed to lift the spirits. Don’t miss the 43rd Newcastle Beer & Cider Festival at Northumbria University. Head to the First Floor of the university’s Students' Union and swap £3 for an all-day wristband, giving you access to the bars - all selling a variety of beers, real ales, cider and perry from local breweries and big names. CAMRA members go for free. We'll cheers to that! The smash-hit production of Annie comes to Newcastle’s Theatre Royal for one week only, direct from London’s West End. Starring award-winning actress, Anita Dobson, as the tyrannical Miss Hannigan, the feel-good revival captures the all-singing, all-dancing fun of the classic 1982 film, with stunning sets, incredible musical performances and heartfelt acting. Following tours with Liam Gallagher, The Kooks, Kasabian and Richard Ashcroft, the DMA’s sold out their own UK headline tour back in December. The Sydney trio are coming back for more this spring, swinging by Newcastle’s O2 Academy for a one-night-only gig. It's the perfect chance to witness the band at the top of their game in NE1! Written by Chinonyerem Odimba, Live Theatre’s Writer in Residence, Princess & The Hustler is a heartwarming new drama about a black British family caught up in a pivotal moment in the country’s history. Set in 1963 Bristol, as Black British Civil Rights campaigners walk on to the streets, 10-year-old Princess finds out what it really means to be black and beautiful when she plans on winning the Weston-super-Mare Beauty Contest.