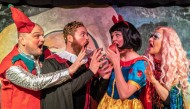 One week to go! Celebrate all things festive in NE1, from food and family time, to theatre thrills, music and city culture...

SNOW WHITE 2 - APPLEY EVER AFTER Christmas is just around the corner... Now’s the time to relax and indulge! Grab a pal or two and settle in at The Great British Cupcakery on the Quayside for a festive feast, showcasing show-stopping scones, cakes and sandwiches - all freshly-baked on-site and full of festive flavour!

IT'S A WONDERFUL LIFE SCREENING Adults with little ones under two are invited to kick-back and relax at Tyneside Cinema with a special Bringing In Baby screening of Christmas flick, It’s A Wonderful Life. A story of hope, family and the power of perspective, the festive tearjerker tells the tale of frustrated business man, George Bailey, whose life seems hopeless until a loveable angel, Clarence, arrives on earth to show him just how much life is worth living. Solo female artist, Channy, arrives in her home city of Newcastle with The Unstoppable Concert - a communitydriven arena show supported by local charity, NE Youth. She’ll be bringing the festive season to life, inviting special guests, dancers, a DJ and competition winners to join her in celebrating the release of her debut single.

THE SNOWMAN WITH THE ROYAL NORTHERN SINFONIA Join The Snowman on a magical journey through the winter sky at Sage Gateshead! The annual showing of the festive classic, which has become a Tyneside tradition, features live, breathtaking orchestral music - guaranteed to warm hearts of all ages!

Let us know what you get upto in NE1 this week via Twitter, Instagram and Facebook! And don't forget to pick up a copy of our Get Into Newcastle magazine where we guide you through all the best bits in out city...