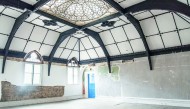 Situated in the heart of the city and one of NE1's oldest Victorian buildings, we went back in time at The Mining Institute! Built in 1872, The Mining Institute on Westgate Road has been a Toon mainstay for 147 years. An important meeting place for scientists, engineers and politicians during the industrial revolution on Tyneside, the centre has overseen reforms in industry safety and helped advance the science and art of mining!

Partly funded by NE1 native and railway pioneer Robert Stephenson, The Mining Institute possesses one of the largest collections of mining information in the world! Containing more than twenty thousand volumes of geology, mechanical engineering, mining law and mineralogy, The Mining Institute is one of NE1’s most significant historical buildings! What lies within the walls is centuries of history relating to the Great North Coalfield, full of tales of engineering excellence, the efforts to benefit from the earth’s crust and the perils that came with!

Fast-forward to 2019 and The Mining Institute is getting a facelift! The Grade II listed building is undergoing a two-year programme that will help preserve the building and create a new hub for innovation and engineering in Newcastle city centre. Having secured an eye-watering £4.1m sum from the National Lottery, work has begun on the building, ensuring iconic features are retained during developments. Preparations are also underway for improving access to the venue!

Watch out for more ‘Behind the Door’ features in future weeks, and if you want to know what’s behind a particular door, why not ask us to look into it? Tweet us @NewcastleNE1