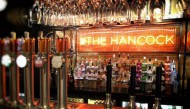 So, you’ve just touched down in the Toon wide-eyed and ready to get your head stuck into your studies. Yeah… right. Before you get yourself locked away in the library for months, why not take the time to visit some of the most important places in the city? And by most important we obviously mean pubs, scran spots and nightclubs.

These haunts are some of the most popular in the city with students. So, whether you’re a fresher or a third year we’ve got you covered with this one. Nestled right in between both Newcastle and Northumbria University, The Hancock has been a favourite haunt of students for years. Despite being refurbished recently The Hancock has that classic cosy pub vibe to it. They’ve got two floors that show sports on big screens, pool tables and a big beer terrace area to enjoy the rare moments of sunshine in the Toon. The Hancock also has a wide selection of beers, lagers and spirits - including Camden IPA on tap… it’s a favourite of ours. You can’t go wrong with The Hancock, it’s all you want in a pub.

Down the other end of the city just across from the Life Centre, The Dog & Parrot is all about great drink deals and great tunes. You’ll spot the David Bowie mural on the wall outside before hearing the indie music blasting out from this super lively bar. Their deal on treble vodkas (yes we do trebles up here!) is legendary amongst Newcastle’s student population. So, if you’re up for a big night out The Dog & Parrot is the perfect warm up spot.

If indie tunes aren’t your thing, head across the road and past central station to the home of hip-hop in Newcastle - Jalou. A cocktail bar by day, Jalou transforms into a hive of energy come the night time. With live DJs playing the best hip-hop, UK rap and chart bangers, Jalou is really where the party’s at. Take a picture with the big mural of Drake, get yourself one of their signature cocktails and just vibe in this stylish black leather clad bar. Who doesn’t love burritos? We do and you soon will too after trying what Zapatista has to offer. They’ve got two restaurants in town, one at Central Station and the other at the top of Northumberland Street, both dishing out top class Mexican street food. You can sit in and tuck into one of their flavour filled Fajitas or you can order an emergency burrito straight to your dorm room door. Zapatista is a must visit. It’s well priced, well made and well lush!

If we had to put money on somewhere to have a queue out of the door at lunch time then we’d go with Frankie and Tony’s Sandwich Bar. Students absolutely love this humble sandwich shop that sits just off Northumberland Street. Like we said, if you can’t find it then look for the shop with the queue outside! The shop’s popularity is down to the variety of fillings and fresh bread they make their sandwiches with. You can basically go in and create your own perfect sandwich at a great price. The hype is real!

There’s nothing quite like a good burger. Not one of those flat fast food ones, a proper burger that’s bursting at the seams with juicy deliciousness. Thankfully that’s what Meat:Stack is all about. The Bigg Market restaurant is known around the city for their big american cheese burgers and mouth watering fries. Evolving from humble beginnings as a market stall in 2016, the Meat:Stack team has worked its way to the top through the reputation of their impeccable burgers. You’ve simply got to try this place. Newcastle’s biggest alternative club night, RISE is the go-to club for those looking to get down to some classic rock, pop-punk, metal and everything in between. Kicking off every Saturday at Grey’s Club, RISE has three floors of hard hitting music blasting late into the night. Their huge terrace plays the best in old school anthemic rock, the main room comes with the very best in alternative music and the top room gets down to a wild combination of hip-hop and blast beats. So, get your favourite band t-shirt on and rock out!

Tucked away in Carliol Square, World Headquarters is one of the most unique and beloved clubs in Newcastle. Known lovingly to locals as ‘Worldies’, World HQ prides itself as being the most inclusive and friendly club in the Toon. They’ve got great nights of music and good vibes virtually every night - and there’s something for everyone. It doesn’t matter if you’re a grime geezer or soul sister, World Headquarters is the place for you.

You can’t discuss a night out in Newcastle without mentioning Digital at least once. This huge club has gained acclaim around the globe after ranking as the 11th best club in the world in a poll by DJ Mag. Boasting three floors of live DJs spinning a variety of genres at their club nights and a whole host of huge live acts gracing their stage on a weekly basis, you’ve got to visit Digital at least once when you’re in the Toon.