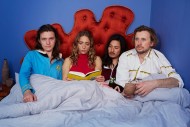 One for new music-lovers! Make sure you check out London electro band, Pumarosa as they whistle into The Cluny.

The band first come together in 2015 after singing sensation, Isabel Munoz-Newsome and drummer, Nicholas Owen arrived for rehersals in a rundown pub in London. With no one else turning up, the duo formed a punk band and Pumarosa was born!

After taking up a residency at a disused cinema in Italy, Pumarosa announced themselves to the world with their stunning debut single, Priestess!

A fantastic band destined for big things, make sure you catch them live in NE1 this November before they take the music world by storm!

Venue Details
Since opening in 1999, The Cluny has built a reputation as a great bar and top live music venue. It attracts different types of people from the whole of Tyneside with its varied music performances and welcoming bar setting.


More About This Venue