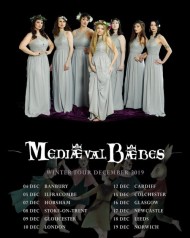 Join the Baebes to celebrate the festive season with haunting tunes from their new ‘nursery rhyme’ album which celebrates the contrast of child-like innocence with the surreal and dark content inherent in these ancient rhymes, plus seasonal favourites.

The unique, classical chart topping choir Mediaeval Baebes was conceptualised and formed in 1996 by musical director, composer and producer Katharine Blake. The group have released 8 studio albums, won an Ivor Novella Award for their performance on the BBC serialisation “The Virgin Queen” and received two Emmy nominations and a Royal Television Society award as the featured artist alongside composer Martin Phipps for the theme tune of ITV’s hit TV show “Victoria” and are performing at Newcastle Cathedral this December.

Venue Details
St Nicholas Cathedral; the Mother Church of the Diocese of Newcastle which stretches from the Tyne to the Tweed. For over 900 years St Nicholas has been the parish church of Newcastle but when in 1882 the new Diocese was founded it also became Englands...


More About This Venue
Booking