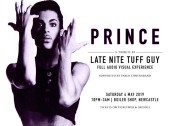 Late Nite Tuff Guy heads to Boiler Shop next May and he brings not only his exclusive Prince Tribute audio/visual set, but the disco and house tinged Late Nite Tuff Guy set he is renowned for to round the night off. Support on the night comes from Pablo Contraband (Disco Deviant).