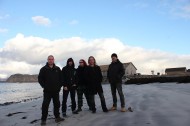 In October 1980 three musicians took to the stage in their hometown of Bradford to play a gig under the name New Model Army. Led by frontman and songwriter Justin Sullivan, this was the start of a remarkable journey which, almost 40 years on, has seen New Model Army develop a fervent worldwide fanbase and reach multiple milestones of both creative and commercial success.

Members have changed over the years and musical styles have evolved but at the heart of the band Justin has remained, along with a distinct and sincere belief in the power of music to inspire and effect change on a personal and political scale, both locally and globally. With the band’s hugely acclaimed albums Between Dog And Wolf (2013) and Winter (2016) bringing renewed critical appreciation, chart success and an ever-growing audience of new fans to join the legion of faithful devotees, New Model Army return in 2019 with one of the finest records of their career ‘From Here’ to be released in August followed by a 38-date UK & European tour visiting 11 countries.

From Here was recorded in early 2019 on the tiny Norwegian island of Giske at the beautiful Ocean Sound Recordings studio and reflects the spectacular isolation of that environment yet has profound messages for the world we all live in and the times we are experiencing.