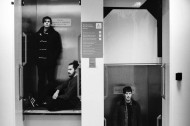 Everybody's favourite musical secret Little Comets have announced a substantial tour to round off what is set to be a busy 2019. With their fifth studio due in October, the band will head out across the UK in celebration of this impending release, playing a mixture of songs old and new from their varied back catalogue.

With recent songs 'The Sneeze' and 'American Tuna' garnering praise across the board for their lyrical and musical content, the band – who intend to release another selection of tracks across the summer – cannot wait to get out on the road to play their music to legions of loyal fans:

“We’ve spent so much time in the studio this year that we can’t wait to play these creations live.” says singer Rob Coles, “The reaction to the new songs has been fantastic so it’ll be great to finally play them to people, plus we haven’t toured for two years so the shows should have a real celebratory feel to them!”