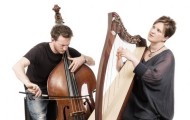 Ange Hardy & Lukas Drinkwater are two of this generations most in-demand performers. Ange has racked up countless awards for her song writing and live performances, including a nomination at the 2015 BBC Ra­­dio 2 Folk Awards and three consecutive FATEA Magazine award wins. Ange’s last two studio albums – both featuring Lukas Drinkwater on double bass and backing vocals – appeared in The Telegraph’s Best Folk Albums lists for 2014 and 2015.

Ange Hardy & Lukas Drinkwater formed as a duo for the 14-night tour that accompanied the multi-award winning album Esteesee based on the life and work of the 18th century poet Samuel Taylor Coleridge. The album featured Steve Knightley, Patsy Reid and Archie Churchill-Moss amongst it’s cast of 11 top folk musicians.

They perform live with a 27-string Salvi harp, 3 different Martin guitars, a parlour guitar, a double bass, an array of traditional whistles, an Indian shruti box and Irish bodhrán drum. Singing new material with a timeless English feel as well as number of reinterpreted traditional folk songs, all accented with Ange’s innovative and subtle use of loop pedals to build layers of vocal harmony live from the stage.

Ange and Lukas are currently writing new material for their 2016 studio albumFindings. Their new songs draw heavily from the folk tradition and broadly focus on the themes of family, migration and local trades.