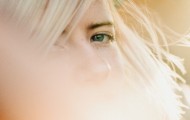 The swirling, steely songs on Amber Arcades’ dazzling debut are the work of Annelotte De Graaf, a woman inspired by “time, continuity, coincidence and magic”, as well as early-morning jetlag (on Turning Light) and an artist’s plans for a utopian city (Constant’s Dream). That may all sound pretty dreamy, and these songs do have wonderful ethereal qualities, but De Graaf’s dreams are not the whimsical kind. De Graaf’s dreams have led to her working as a legal aide on UN war crime tribunals, to inviting skint strangers to share her Utrecht squat, and to spending her life savings on a flight to New York because that’s where she wanted to record her first album.

Annelotte worked with Shane Butler and Keven Lareau of Quilt on guitar and bass, and Jackson Pollis of Real Estate on drums (plus Meg Duffy playing slide guitar on the eerie, clip-clopping Apophenia) at Strange Weather recording studio in Greenpoint. They listened to “a lot of Suicide, a lot of Broadcast, Stereolab, Yo La Tengo, The Gun Club…” and worked on the songs that Annelotte had written at home in Utrecht.