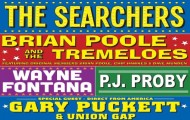 For lovers of Sixties music, this is the ultimate, and probably never to be repeated, line-up.

From Liverpool, where it all started, and tipped to be as big as The Beatles, The Searchers’ first single went to No.1 and led to five more Top 5 hits and a total of 128 weeks in the charts.

Brian Poole & The Tremeloes, the band that broke the Liverpool stranglehold and went on to have 21 hits that spent over 220 weeks in the UK charts.

Controversial, ponytailed P.J. Proby, whose trouser splitting shocked the nation, was a Melody Maker teen idol award winner in 1964 and spent 91 weeks in the charts.

Wayne Fontana, originally from Manchester, spent over 75 weeks in the British charts with hits such as Game Of Love, Um Um Um Um Um and Pamela Pamela. 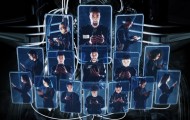