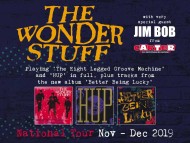 Make sure you catch The Wonder Stuff at the O2 Academy Newcastle this December.

This year not only sees The Wonder Stuff release their ninth album, Better Being Lucky, but it also marks 30 years since the release of the band’s classic second album, HUP. To celebrate the new record and the landmark anniversary, The Wonder Stuff will be touring the UK playing HUP in its entirety and showcasing tracks from the upcoming album Better Being Lucky. That’s not it, though, as the band will also be throwing in a full performance of their seminal debut album, The Eight Legged Groove Machine!