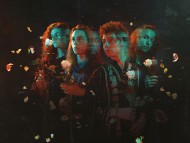 After a lot of anticipitation following the postponement of the original show, Greta Van Fleet are coming to Newcastle!

Being one of the most buzzed-about new rock bands today, receiving praise from Elton John and Nikki Sixx amongst others, fans can expect an unforgettable show!

Under 14s must be accompanied by an adult.