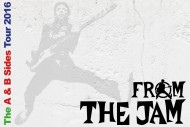 From The Jam: O2 Academy Newcastle

From the Jam featuring original Jam member Bruce Foxton (Bass/Vocals) along with Russell Hastings (Guitar/Vocals) and Smiley (Drums) will be performing the A & B Side to every single released by The Jam. One of the biggest selling bands in British history, The Jam had 18 consecutive Top 40 singles in the UK, from their debut studio album, In the City, in 1977 to their last single ‘Beat Surrender’ in December 1982, including four Number 1 hits.