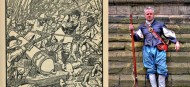 A talk about the Siege of Newcastle, which culminated in October 1644, given by military historian John Sadler.

Master John Sadler, scribe, chronicler and loyal subject of his Majesty King Charles will relate with style, vigour and even an element of panache the role of Newcastle upon Tyne during the Civil Wars long past and relating most particularly to that infamous and deadly siege by our enemies the Scottish covenanters who with a vast host and abundant ordnance sought to reduce our fair town to their will, obeying the demands of that impious group of rebels called parliament who did most malevolently offend the king’s peace – not to mention our just profits from the coal trade … and as for the inhabitants of that place named Sunderland, no single note of calumny will suffice. Hear all at the Back Gate on 19th October at six of the clock. Book early good citizens for demand will be high as surely as we will have contention!

Praise God and the King (and bring your own powder).