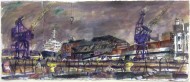 The work of Richard Hobson buzzes with the intensity and vibrancy of an artist completely absorbed in capturing the spirit of the North East. Towering cranes of Tyneside shipyards, industrial Northumbrian landscapes and excited Cullercoats day-trippers were all regular subjects. Hobson worked quickly and instinctively, outdoors in all seasons and weathers, giving his paintings and drawings a sense of gritty realism.

Hobson began his career designing furniture and interiors in London before returning to Newcastle, undertaking similar roles for Swan Hunter’s Shipyard in the late 1960s. He went on to study the Conservation of Easel Painting at Gateshead College, becoming Conservator at the Bowes Museum, Barnard Castle, a position he held for 31 years alongside his successful career as a professional artist.

Through his contacts, Hobson was able to gain access from shipyard managers to work on site. He often knew the men working, and was quick to strike up conversation and tell tales. Hobson’s warmth and understanding, combined with his remarkable skill as a draughtsman, resulted in a body of work capturing a rich, detailed portrait of working life in the North-East of England.

However, to create a record or document was never the artist’s intention. Hobson was drawn to scenes which spoke to him artistically, finding beauty in the everyday world around him. Towering cranes in cobalt and ultramarine glow against heavy skies. Slaughtered pigs hanging in a Grainger Market butcher’s shop are sensitively drawn next to cuts of raw meat in bright vermillion.

Richard Hobson held his first solo exhibition at the Shipley Art Gallery, Gateshead, in 1972. He exhibited continuously throughout his career, showing work at the Royal Academy, London, the Royal Scottish Society of Watercolour Painters, Edinburgh, and at numerous galleries throughout the North East. His work is held by Tyne and Wear Museums and Archives and in private collections nationally.