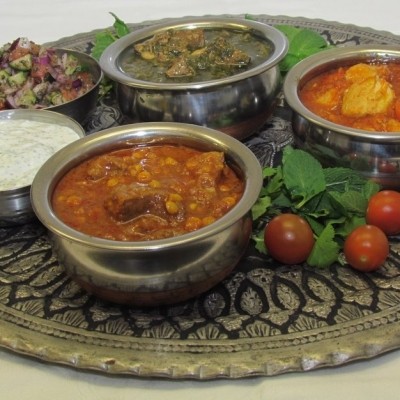 A Taste of Persia

The Cuisine of Persia is unique and forms the part of a rich cultural experience that has been evolving since Achaemenid times. The ideas of ancient physicians and philosophers aim to combine food and drink in a manner that is integral in maintaining strength in body and mind. Long before Weight watchers, these wise Persians concluded that a good diet did not involve an excess of fat, red meat, starch or alcohol. The persian philosophy of food also indicates that to maintain a balanced diet 'hot' and 'cold' foods are eaten together. This is still widely adhered to. Yogurt, cheese, radishes and fresh green herbs are all 'cold' and are as common on Persian tables as salt and pepper is in the West. They act as a balance to meats and sweet dishes, which are both 'hot'. The origins of many dishes are shrouded in its long history of more than three thousand years. Persian cuisine has had a remarkable influence on the cooking of many regions, from ancient Rome and Greece to Mogul India, the muslim world and the Ottoman Empire. Equally it has itself been influenced over the centuries, so that today, despite its alluring exotic air, the cuisine has a warm familiarity. A Taste of Persia's food can be identified by its sumptuous rice dishes, its intriguing and delicate flavours, and its combination of herbs, saffron, fruits and nuts.