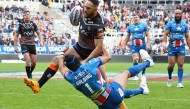 CHRISTMAS AT THE CATHEDRAL Gather the whole gang and settle in for a magical evening at St Nicholas' Cathedral as Christmas at the Cathedral returns for another year! In Aid of The Sir Bobby Robson Foundation, this spectacular seasonal event celebrates some of the region's hottest entertainers. With full details of this year’s line-up arriving soon, keep your eyes peeled as world-class performers get announced in the coming weeks! The future of punk rock is heading to NE1! Rising Irish punk band, Fontaines D.C touch down at the O2 Academy early next year! The band shot to superstardom following the release of their stunning debut album ‘Dogrel’ - a politically-charged punk statement that was included as a finalist in this year’s Mercury Music Prize. Renowned for their raucous live performances, don’t miss out on the chance to see this group of incredible rockers as they hit the Toon. Tickets for this gig are very limited, contact the O2 Academy Newcastle for more info! Take a magical carpet ride to Agrabah this Christmas with family fun panto, Aladdin! Featuring X Factor runner- up and West End Theatre star Marcus Collins, this hilarious panto spectacular is a tremendous treat for the whole family! With an amazing live band and a whole host of top TV stars, cheer on Aladdin as he battles against the evil Abanazar!

E.T. THE EXTRA- TERRESTRIAL IN CONCERT WITH RNS Settle in at Sage Gateshead as Steven Spielberg’s spellbinding E.T. The Extra-Terrestrial comes alive with the Royal Northern Sinfonia! One of the most iconic films in modern history, E.T. is a stunning story about a lost alien who befriends a 10-year-old boy named Elliott. A breathtaking exploration of friendship and understanding, experience this amazing film like never before as the Royal Northern Sinfonia perform John Williams' Academy Award®-winning score live alongside the screening! Super League’s iconic sporting summer party returns to Newcastle in 2020 promising a weekend of fun for the whole family! Over 60,000 fans from NE1 and across the country will once again flock to Newcastle and the wonderful St James’ Park to watch and cheer as rugby league’s top teams battle it out on the field across two-days of amazing action. Fans can expect mammoth clashes, live music, fancy dress and more! Taking place on the bank holiday weekend of 23rd and 24th May, make sure you don’t miss out on this carnival occasion of top-class live sport – it promises to be electric!