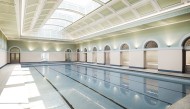 Giving you the lowdown on the latest projects & developments in the Toon... BBC director general, Tony Hall, has recently announced that the BBC will open a leading technology and media hub right here in the city centre! Lord Hall stated that: “Design and engineering are creating a new tech hub in Newcastle upon Tyne - a city looking for fresh ideas, collaboration and innovation, with two highly successful universities and a digital cluster growing faster than any area outside London.” A massive development for the media sector in the region, the new tech centre would mean that more primetime programmes, short films and other media activities would be produced right here in the Toon!

NE1’s partygoers helped raise a record sum for a leading North East kids charity in December! Staff at Boulevard cabaret club held numerous fundraisers, shook buckets aplenty and hosted loads of cracking charity events to raise a staggering £20,000 for the Graham Wylie Foundation - a fantastic charity helping children and young people across the region. Boulevard are no strangers to charity work... they also raised a sensational £150,000 during an inaugural Halloween Spectacular. Amazing work everybody! One of the biggest developments in the city’s history is set to turn listed buildings around Newcastle’s Pilgrim Street to bustling new bars, restaurants and office buildings. This exciting project will breathe new life into this side of the city, while also generating jobs and creating a hub of social and professional activity. The £100m development would see the former Bank of England plot turned into office blocks and leisure facilities, with work on the 12-floor Bank House office due to start in summer. Our friends at Pink Lane Bakery are doing their bit to reduce the site’s carbon footprint by ditching delivery vans in favour of ZMOVE’s zero-emission bikes! Switching up the delivery service will save the business almost £4,000 by avoiding new anti-pollution tolls. Loaded on board ZMOVE’s electric cargo bikes, the bakery’s daily trips from their home on Pink Lane to their retail site in Gosforth will clock up to almost 2,400 miles annually. One of NE1's biggest and most talked about developments for 2020 is the iconic City Baths! We're delighted to hear that the facility is back in action and we can't wait to share what's inside following a spectacular £7.5m restoration...

Built way back in 1928 by Nicholas and Dixon-Spain, the Grade II Listed building rolled out the red carpet to guests this winter - showing off the elegant confines of a new state-of-the- art wellness facility.

Built in a neo-Georgian style with art deco undertones, the original building featured two pool halls and a traditional Turkish bath suite. Now, it's back in action with more wonderful wellness facilities than ever before! As well as carrying out beautiful restoration work to the building’s facade, the team have been hard at work creating modern health and fitness facilities fit for a bustling city like ours!

Make sure you visit the brand spanking new City Baths and see what all the fuss is about! Before you do... a fun fact: Did you know that during the bitterly cold winter months, the swimming pools were covered with temporary flooring and instead used for the likes of dances, roller-skating and art exhibitions?