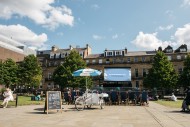 Everything You Need To Know About NE1's Screen on the Green

NE1’s Screen On The Green returned to Newcastle on Monday 27th June, and it offers the perfect excuse for lazing around in the sunshine and enjoying some downtime this summer! Whether you choose to catch a movie with friends or family during the school holidays, or settle in for some exciting sporting action, here’s everything you need to know about the city’s outdoor cinema experience!

What Is Screen On The Green?

Screen On The Green is a free, family-friendly outdoor cinema located in the heart of the city. You’re invited to chill out on deckchairs, beanbags and picnic benches, bring the kids, take a load off and enjoy a film or some international sport in an oasis of calm!

The big screen is set up in Old Eldon Square, just steps away from Monument.

What are the dates?

The screen will be in place from Monday 27th June, when there will be a month of sporting fixtures shown, before family-friendly movies kick off from Monday 25th July and run right through until Sunday 4th September. What sports will be shown?

The first two weeks will show matches from Wimbledon (so the sun is bound to shine!). The screen will also show the England and Northern Ireland football games in the Women’s European Championship – Wednesday 6th July will see England play, with Northern Ireland playing the following evening, and both teams playing on Monday 11th (Northern Ireland at 5pm, England at 8pm), things get serious on Friday 15th when both teams play each other! If they progress further into the semi-final or finals, those matches will be shown too. Nail-biting stuff!

When will the movies be shown?

To coincide with the first day of the summer holidays on Monday 25th July, the big screen will show two movies every day with everything from big name blockbusters and Oscar-nominated movies to cult classics and awesome family flicks.

Are all the films suitable for children?

All the films screened will be 12A or below, meaning it’s perfect for everyone in the family. The 12A films will be marked on the schedule which will be released closer to the time, and everything is suitable for showing in a family-friendly environment.

That’s not to say adults can’t have a little fun too – in fact, if you missed the latest Hollywood blockbuster at the cinema, chances are good you’ll get a chance to see it here, for free!

What time are the films shown?

Two movies are shown every day, the first at 12pm and another at 6pm. At weekends, head into town in time for screenings at 12pm and 3pm. The screening schedule will be released closer to the time so you can plan to see your favourite movie.

Can I reserve a seat?

All the screenings are free, and there’s no need to reserve a seat or get a ticket. We advise to get there a little earlier if it’s a popular film or one you’re dying to see, just in case!

What if it rains?

We do live in Northern England, and sometimes the weather doesn’t play ball! The show will go on regardless though, so check the forecast and dress appropriately, and don’t forget the brolly!

Can I eat and drink during the screenings?

What’s a movie without snacks? Grab picnic supplies from loads of businesses nearby, including Tesco on Clayton Street or Waitrose in Eldon Square. There’s also a Greggs on the corner for that emergency sausage roll, and a Starbucks and Costa in Eldon Square, as well as The Real Greek, and some local independent venues all surrounding the square itself.

Why not make a day of it and go for a late lunch or dinner after the film? Just a hop, skip and a jump away on the fringes of Old Eldon Square there are a range of great restaurants including Wagamama, TGI Fridays, and Pizza Express.

Screen On The Green is just one of the great events NE1 are offering up for your enjoyment this summer. Whether you’re looking for a perfect way to entertain the kids, want something different to do on your lunch break, or just fancy a free movie in lovely surroundings, Screen On The Green’s got something for you. Just don’t forget the popcorn!